What is a swirl pot, and how do they work?

Before we detail what a swirl pot is, we first need to understand the benefits of using one and the best ways to go about installing one. We installed an entire swirl pot system in our turbo civic a few weeks back, so if you need the see the installation visually, head over to our youtube or click this link to head straight there.

What is fuel surge (starvation)?

First off, we need to understand what a fuel surge is and the adverse effects on your car.

The leading cause of fuel surge or starvation is when a car is accelerating, braking, or cornering hard where the fuel can shift in the tank away from the fuel pickup.

The fuel far from the pickup will pull air into the fuel system. When a fuel-injected engine is starved of fuel, even for a limited amount of time, it will at the very least slow you down by causing the engine to “splutter”. However, the worst-case example of this would be damage to your engine and fuel pump, especially if this was happening regularly, like fast cornering on track.

If you drive a standard factory car to work and back abiding by all traffic laws, you would likely never experience this. However, if you have added forced induction to a vehicle or increased the power excessively, it might be time to invest in your fuel system.

If you are running high power carburettors, then it is likely they have a big enough float chamber to compensate for fuel surge. 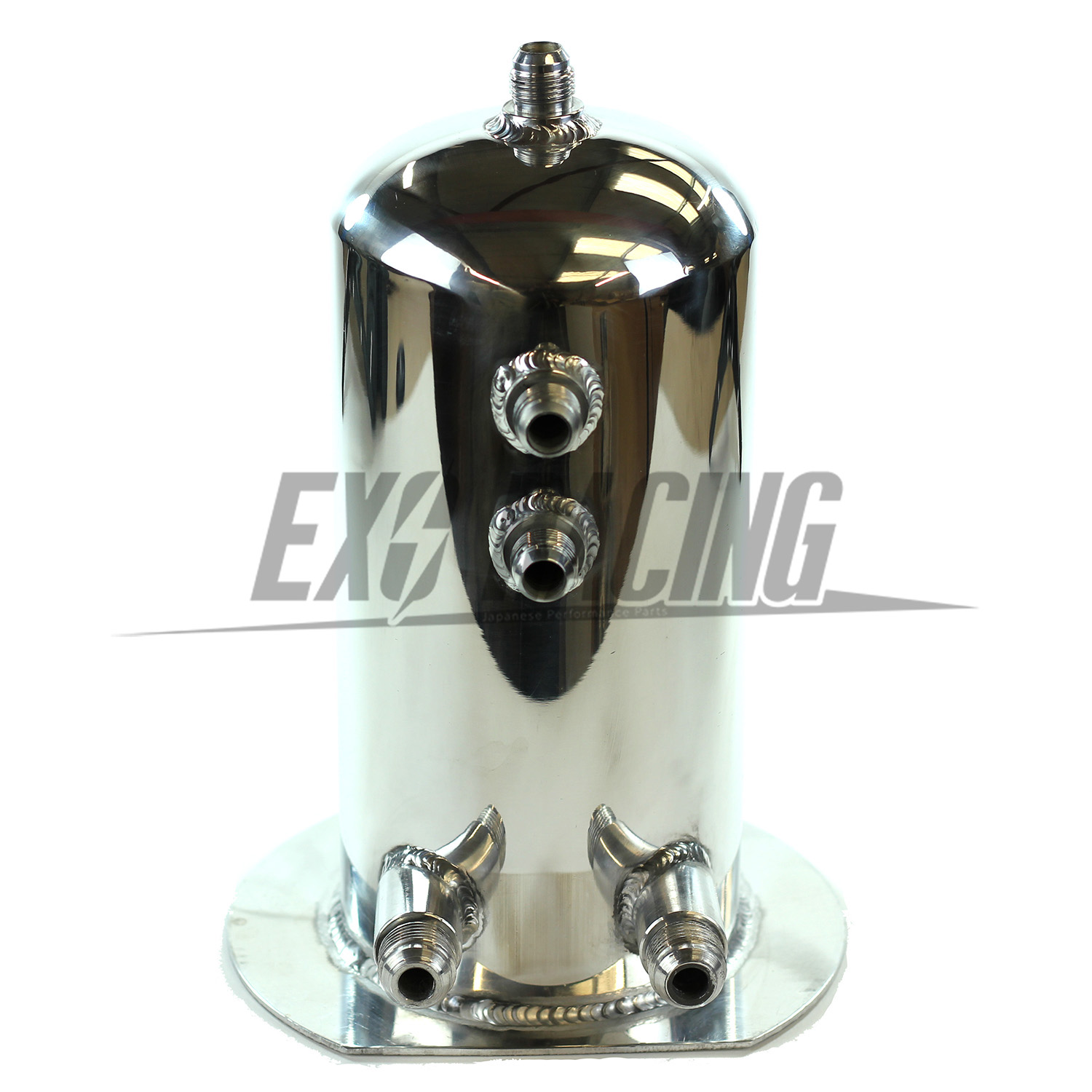 What is a swirl pot/surge tank?

acts as a supporting fuel tank between your main tank and the engine.

The idea behind the name 'swirl pot' is because when the fuel enters the pot, it is forced in at an angle that spins the fuel around the tank, the same way water goes down the bathplug.

Because the fuel is swirling around the tank, it does not matter which direction the car is going or how fast it is doing it; the fuel is constantly being forced around the pot to the bottom where the main pump will pick up the fuel and send it to the fuel rail.

How does it work?

The fuel is taken from the main tank via lifter pumps in a fuel system with a swirl pot. This process will always keep the swirl pot full of fuel. Fuel is then drawn along the system by the main pump to the fuel pressure regulator. The regulator then dictates how much fuel goes into the rail and how much is returned. The swirl pot has a return feed back into the main tank that keeps the fuel in the swirl pot at the correct level. Without this, the swirl pot could become massively pressurised, resulting in the tank bursting and leaking fuel into the car.

What are the benefits?

The main benefit of a swirl pot system is ensuring that you never encounter fuel starvation. Suppose you are planning to run a cheaper aluminium fuel cell. In that case, you are even more likely to face fuel starvation as generally, the more inferior tanks are not baffled, and the fuel can move around the tank very quickly.

If you plan to remove the original fuel tank and replace it with a fuel cell and swirl pot, you might also save yourself some weight in the process.

Many older fuel tanks are cumbersome and weigh a lot compared to modern aluminium tanks. Moving the fuel system to the car's boot also may work in your favour for distributing weight around the car. Many vehicles come out of the factory front heavy, and evening this out can help pull some weight back and balance the vehicle. 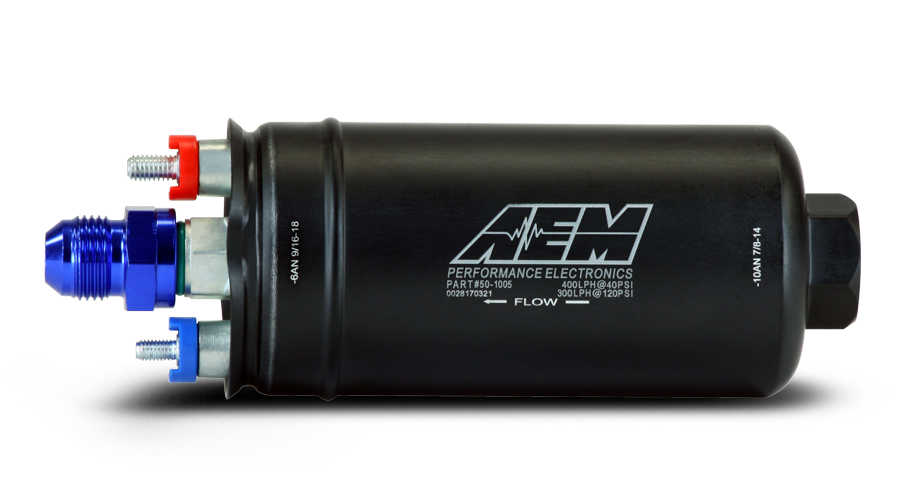 Is there any reason to not run a swirl pot?

In some cases, a swirl pot will have the pump inside, but if it does not, you will have to fit an external lifter pump and main pump somewhere inside your car. These can be very loud! If you plan on daily driving the car, in-tank pumps may be the way to go.

Safety is also a thing to think about when fitting a fuel system inside your car with a fuel cell and swirl pot. Usually, the fuel system is added into the boot, where there is a lot of room to fit everything needed.

However, in the event of being rear-ended by another car, it would be possible for the fuel system to be compromised in the impact. The fuel inside the vehicle is a massive safety risk, and if you plan on doing such an install, it would be wise to add a rear crash bar and a firewall to protect yourself.

Could I fit my fuel system?

Fitting a fuel system is something that you should do with great caution. The physical installation of a fuel cell, swirl pot and pumps are straightforward where mounting holes need to be drilled then can bolt everything.

The challenges come with getting the new fuel lines made with AN fittings ensuring that no leaks will occur. The fuel inside the car is hazardous, as you can probably imagine! It would be possible to use a rubber hose with push-on fittings. However, if you are running these lines through the car, there is a strong chance that they will leak fuel vapour in the cabin.

Rubber hose is also delicate and can be easily damaged. It is possible to get a rubber hose with stainless steel braiding around it to protect the line. 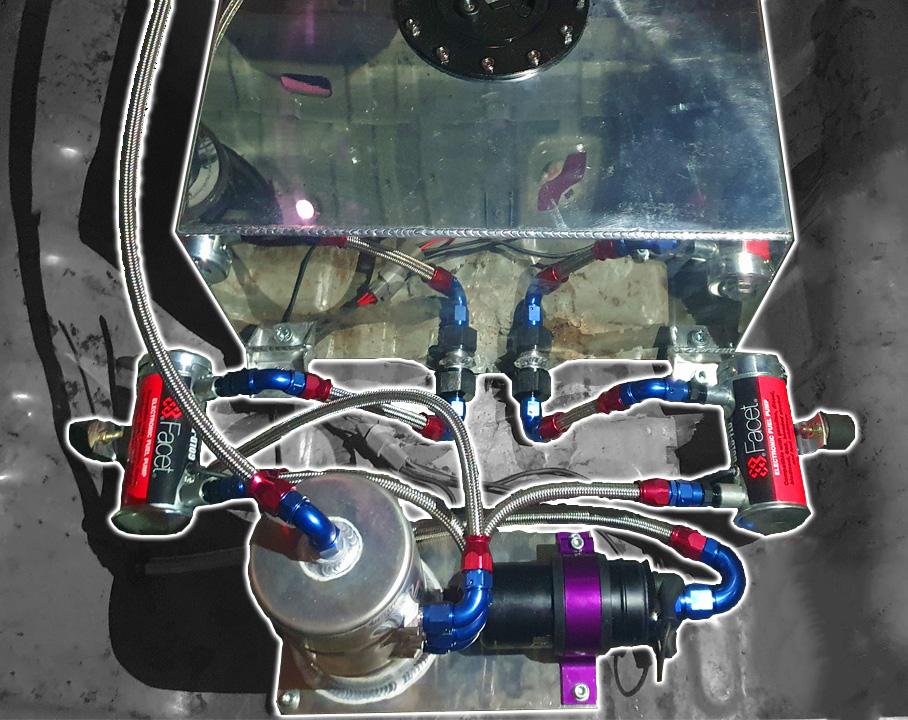 The best option would be to go with a Teflon (PTFE) line. With modern fuels having an increasing amount of ethanol in them, the rubber hose would perish with time if using more ethanol than UK pump fuel and need replacing more often.

However, the Teflon line is resistant to ethanol, meaning it can be used with most fuel, even race fuel, plus you do not get any fuel vapour inside the car!

On each fuel line you run, both ends will need a fitting of some type. The safest for this application would be AN fittings.

These are forced over the line and then tightened with AN spanners ensuring a solid seal and no damage to fitting.

If this is something you have no experience with, it is best to get a professional to help prepare the lines.

When choosing what swirl pot to go with, you need to consider how much fuel you will need. You would only need one lifter pump for some applications, which means fewer ports on the swirl port. For this reason, it is best to choose which pumps are going to be the best for your application.

Choosing the correct fuel pump and lifter pumps is again more complicated. You would need to work out how much LPH you need (litres per hour), then match the lifter pumps to the main fuel pump to ensure even fuel delivery. After all of this has been installed, the wiring still would need to be done.

Wiring for some people can be the most complicated bit of all. Most fuel cells have sender units that tell you how much fuel is in the tank; these can be wired into the old fuel gauge in the car. Each pump also needs to be wired in, including the correct relays if needed.

If you are interested in building your fuel system, we can supply everything needed and advise choosing the proper hardware for your individual needs.